Hi guys!!! Today I have another post about the amazing Harlow ONE Series from Harlow & Co. This month it’s the Pawsome Duo by Colores de Carol. 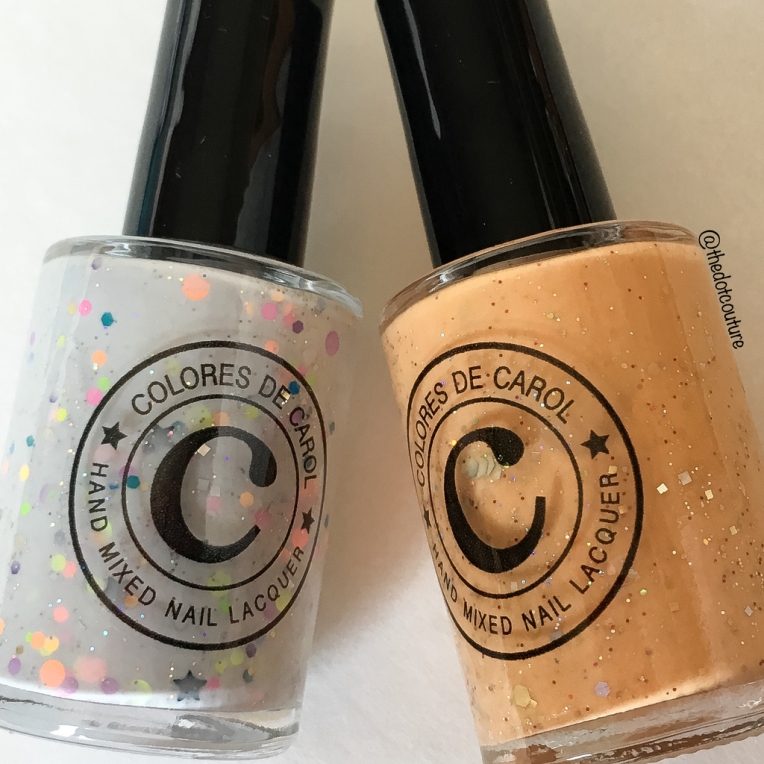 The Harlow ONE Series is a project created by Harlow & Co. and features a special polish produced from one Indie brand each month. The brand picks a cause near and dear to them, creates the polish(es) exclusively for Harlow  Co., and $1.00 Canadian Dollar per polish is donated to said cause. Pre-orders for the next month’s sets take place on the 20th of each month.

On May 1st, 2016, a wildfire more devastating that anything we have ever seen here in Canada broke out and destroyed approximately 2,400 homes and buildings, forcing over the evacuation of over 80,000 people. While efforts were put into stopping the fire and evacuating the town, the Alberta SPCA started the rescue of the many pets and animals that sadly had to be abandoned during the evacuation. As an animal lover herself, Carolina, the woman behind Colores de Carol created this beautiful duo for the Harlow ONE Series, to help the Alberta SPCA in their efforts.

This is described as a crelly creamsicle with a subtle multi-chrome shift, micro red holo glitter, and a mix of gold holo glitter. It’s got some nice shape mixes, squares and hexes, and the red holo micro glitter really stands out in the creamy orange base. It’s a beautiful formula – this is my first experience with Colores de Carol, and I am impressed!!! The swatches below are two coats with top coat. I like that I was able to get it opaque in two coats as sometimes glitter crelly polishes can build up to be quite thick on the nail. Not at all in this case!

Next up is this white crelly with silver, crystal, and gold micro glitters, and neon glitters in various shapes (hex, square, circle, star) and sizes. There are even some black stars and hexes in there. I LOVE white crelly polishes, and add in neon glitters and I’m in heaven!!! This was opaque in two coats, which is amazing for a white crelly (they can sometimes be quite sheer so as to not obstruct all the glitters). Very nice and easy formula!

Removal was moderately difficult for both polishes, which is to be expected for this type of glitter crelly finish.

I love the idea behind the Harlow ONE Series. I wrote about the Girly Bits Memorial Duo for the Alzheimer’s Society of Canada a couple of months ago, a cause that hits very close to home. You can read more about the Harlow ONE Series at Harlow & Co. here. You can purchase this limited edition Colores de Carol Pawsome DUO and know that you are not only getting two amazing polishes from a great indie brand and great indie stockist, but that you are making a difference as well.

Stay tuned for more amazing collaborations for the Harlow ONE Series.

Until next time, happy painting!

These items were provided to me for my honest review.