Halloween (and Autumn in general) is my favourite time of the year. It’s also the time for my favourite kind of nail polishes – HALLOWEEN POLISHES!!!! Make no mistake, these polishes are not limited to wear strictly during the haunting season. I indulge in these awesomely spooky polishes year round. From the innovative glitter/base combos to the imaginative (and often punny) Halloween or Autumnal names, these polishes will put you in the mood for pumpkin spice lattes and jack-o-lantern carving in no time!!! 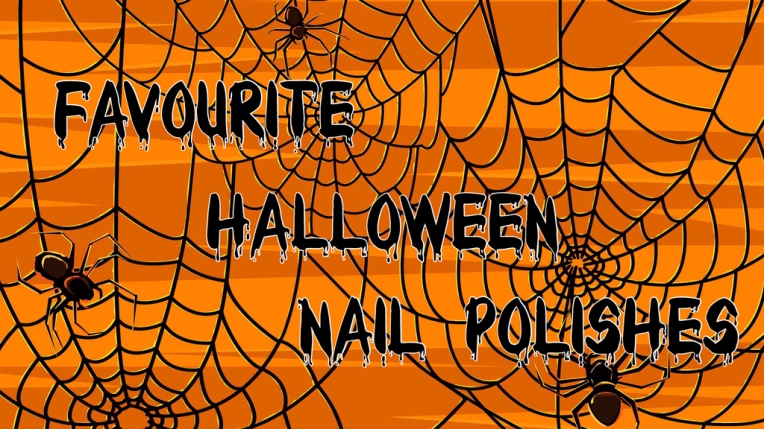 Some of these polishes will be harder to find than others, and some are still readily available, but you should be able to find them either on Amazon or at an online e-tailer. These were all purchased within the last year.

One of my favourite mainstream producers of Halloween polishes is China Glaze. You’ll see quite a few China Glaze polishes made this list!!!! Howl You Doin’ is from the 2013 Monster’s Ball Halloween collection.

Howl You Doin’ is a deep purple base with small blue and orange glitters. This polish was fully opaque in 2 coats!!!!

This is a glitter topper that was originally released in 2012 but was subsequently re-released in 2013 and again in 2014 with Sinful Colors’ Halloween collection. This is truly autumn in a bottle! It’s orange and gold glitter in a clear base. For my photo below, I used a makeup sponge and dabbed on an opaque coat.

Oh my gosh. Halloween in a bottle. That’s the best way to describe this polish. KBShimmer does this kind of glitter crelly polish to perfection! The best part is it glows in the dark!!!!

Here it is glowing on it’s own in the dark:

It also reacts under a black light!!!!

Isn’t that amazing?? Here is a compilation shot:

This polish from the 2014 Apocalypse of Color is truly innovative and unique (it could easily be mistaken for an indie!). It’s a light pink crelly base with reddish-pink metallic shard glitter. It totally emulates ripped bloody flesh!

And here are some nails I did for The Walking Dead season premiere last year using China Glaze Don’t Let The Dead Bite:

From their 2013 Halloween collection. Gray microglitter and orange hex glitter in a clear jelly base – opaque in 3 coats. I should warn you ahead of time that this polish might be difficult to find – I found one lonely bottle in a Canadian Dollarama so you never know. It had been on my wish list for years too so I was thrilled!!! This polish was a bit of a chameleon so I have several pictures:

China Glaze But of Corpse

Another from the 2014 Apocalypse of Color collection. I adored this entire collection!!! But of Corpse is a metallic green base with a small black micro glitter throughout. It dries textured but looks AMAZING with top coat! And it’s a one coater. Winning!

This one could have been titled “Picture Polish Made Specifically for Jenny.” Autumn is a beautiful burnt orange with small scattered holographic flakies. Not technically a Halloween polish but definitely a perfect sweater weather polish! Lots o’ pictures because gorgeousness!

China Glaze Ghostess with the Mostess

Halloween in a bottle – mainstream version. It’s a glitter topper with everything you think of when you think Halloween thrown in there. The purple hex glitters even have little stripes on them, just like a witches’ stockings!!!! I did one coat over white.

Originally from their Fall 2012 collection, Jack is a black jelly base with orange and black glitters.   A great Halloween polish!!!!

This was on my want list forevor! It’s from the 2010 Awakening Halloween collection. Orange microglitter in a jelly base. Need I say more?

From their 2016 Coven collection. This polish is named after one of the main characters from the movie The Craft (if you haven’t seen it, you should definitely check it out this Halloween season!!!)  It’s a vibrant witchy blue/purple with small holographic flakes. Mesmerizing!!!!!

This polish is available now at http://www.glampolish.com.au/products!

Last but not least we have It’s Alive from China Glaze. I know, another China Glaze! I really think they just dominate the mainstream Halloween collection market (or they have for the past 5 years, this year was a supreme disappointment). It’s Alive is from the 2011 Haunting Halloween Collection and is a combo of mossy green and brighter green glitters in a jelly base. It’s incredible!!!!

So there are some of my FAVOURITE Halloween polishes. This is by no means a comprehensive list. I’m such a sucker for a Halloween polish – this post really could have been 5 times as long!!! But have no fear, I love CHRISTMAS almost as much as I do Halloween!!!! Dare I say maybe even equally as much?? Perhaps there will be a top Christmas nail polishes post in the near future. Do you like wearing festive polishes this time of year?? What polishes do you like for Halloween??

Remember to check me out on Instagram at @thedotcouture. Until next time, happy painting!